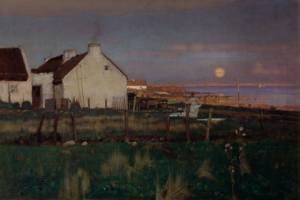 There’s a collective of artists called the Glasgow Boys who were working at the end of the 19th century who’ve inspired both my photography and my painting. James Guthrie (right) is a particular favourite. I love his technique where some areas of the painting are quite sharp in detail while others aren’t. His composition is always spot on, and the lighting and colour palette supreme. The painting above is by James Paterson, another member of the collective.

The paintings of Iona by the Scottish colourist Cadell has also inspired me.  I love his use of colour and the simple unfussy way he works.

As a child, I used to pour over Paul Strand’s book of South Uist, ‘Tir a Mhurain’. Growing up there I recognised the places and quite a few of the people. There were very few books featuring Uist, and I was very taken with Strand’s photographs. I remember really liking the film grain he’d used, and I find that I tend to increase grain in many of my black and white digital photos.

The biggest influence on my photography was my Dad, Kenneth Robertson. He was rarely without a camera, and I used to help him in the darkroom in South Uist from a very young age. He was a doctor and sometimes as a child I went with him on his rounds and we’d chat about the huge skies and the light at different times of year. Sometimes a scene would catch his eye and he’d leap out of the car with his camera and capture the moment. I still have all his photographs.

I grew up on the island of South Uist in the Outer Hebrides and I find that this has influenced many aspects of my life including the subjects that I photograph. My background is in art and I have worked as an illustrator for many years. View all posts by Shona Grant